↓ Skip to Main Content
Home › In English › Analysis: Who Participated in the NRM´s National Socialist Demonstration on Independence Day?

Analysis: Who Participated in the NRM´s National Socialist Demonstration on Independence Day?

The Nordic Resistance Movement gathered for a demonstration at Narinkkatori, Kamppi in Helsinki. In the middle of front line, two members of the Swedish branch. The Swedish members attending the NMR in Tampere in October were also set to pose similarly.

The Nordic Resistance Movement (NRM) organized a National Socialist demonstration “Kohti vapautta” on the 6th of December 2017 in Helsinki. The police did nothing to prevent the demonstration, but practically assured its realization instead. In many European countries similar events are prohibited, especially the use of openly National Socialist rhetoric and imagery. Hitler-stickers were handed out to people attending the demonstration, the participants gave Nazi salutes during the demonstration and the speeches glorified national socialism, death and revolution. Approximately 300 people participated in the event. In the following we take a closer look at the participants: who were marching in this extremist demonstration and which members of different right-wing groups had traveled to Finland in order to take part in the far-right demonstrations.

Pär Sjögren (on the left) interviewing Antti Niemi, the leader of the Finnish branch from Orivesi, for the Nordic Resistance Movement´s Swedish Web-TV, the Nordfront TV (NTV).

The Nordic Resistance Movement handed out stickers advertising their web page with a picture of fanatically admired Adolf Hitler.

The guidelines of the Nordic Resistance Movement for the participants: “After the demonstration the majority of people will move to the 612- march starting from Töölö marketplace. Everyone can go there together as a one big group.”

The leadership of the Nordic Resistance Movement´s Finnish branch together with the majority of the members were, of course, attending their own demonstration (others were probably reporting online and/or preparing after party for the demonstration.) The leader, Antti Niemi, marched in the middle of the demonstration, surrounded by other activists of the movement. The person who encouraged the crowd to shout protest slogans was Petri Nordman from Tampere (also having the same task in the NRM´s demonstration in Tampere 21th of October 2017). Nordman has been active in the movement for a long time and is originally from Vantaa.

The security guards and the people responsible for the event were almost the same as in the NRM´s demonstration in Tampere. One of the main security guards was Jesse Torniainen, infamous for killing Jimi Karttunen in 2016. Others were, for instance, Tomi Tiihonen and Rami Rantanen from Jyväskylä, Niklas Suomi from Porvoo and Rami Termonen from Helsinki. The participants came from, in addition to Helsinki, all over the country, from Tampere, Ylivieska, Oulu, Porvoo, Pori, Jyväskylä and some other cities. The event was filmed by their IT-representative Paavo Laitinen, by whose name the Kohti vapautta web page made for advertising the demonstration has been registered. Torniainen was seen filming with a video camera all day long, too. The person responsible for live streaming and social media updating was Santeri Keränen from Oulu.

Jesse Torniainen was one of the main organizers of the Nordic Resistance Movement´s Kohti vapautta -demonstration. In the picture taken later same day Torniainen is in the 612 -demonstration that gathered people from different far-right movements.

The last on the left Antti Niemi, the leader of the Nordic Resistance Movement´s Finnish branch. On the right corner Tomi Tiihonen, who was working as a safety guard in the NRM´s demonstration in Tampere, supervising the march.

Tomi Tiihonen later on the same day in the 612 -demonstration.

Niklas Suomi from Porvoo was one of the national socialist demonstation´s safety guards. Suomi is active in the NRM´s local group of Helsinki.

Niklas Suomi (wearing the NRM´s rune patterned scarf, on the left) and Rami Termonen (on Suomi´s right side) were working as safety guards in the NRM´s Kohti Vapautta -demonstration. In the picture Suomi and Termonen with other PVL members in the far-right 612 -demonstration on the same day.

Paavo Laitinen in the front with the digital camera in the NRM´s demonstration. On the left side of Laitinen with a red and white flag Maik Müller, a nazi leader from Dresden.

The NRM´s Paavo Laitinen, who has been active for a long time in Jyväskylä, filming both demonstrations with a digital camera. In the middle of the picture Laitinen in the 612 -demonstration.

When the NRM´s Finnish and Swedish activists arrived at the Mäntymäki area behind Helsinki Kisahalli – sports hall, they formed a flag formation, in front of which four speeches were given. The following people gave the speeches in this order: the local group leader Cari Murto from Pori, the local group leader Santeri Keränen from Oulu, the leader of the Swedish branch and the entire Nordic Resistance Movement Simon Lindberg, and Janne Moilanen, an active member of the local group of Helsinki. Moilanen´s speech culminated in the end, when the NRM´s members set off green lit flares, Moilanen gave a Nazi salute and made the crowd shout “Long live victory! Long live victory! Revolution!”. Many participants of the demonstration started to give Nazi salutes, too.

The NRM´s member Janne Moilanen from Helsinki gave the final speech in the Kohti vapautta -demonstration topped off with Nazi salutes.

Lit flares and Nazi salutes seem to be of no importance to the Finnish police, even though in Sweden (let alone Germany) the police announced already before the demonstrations in Gothenburg, that giving Nazi salutes or using nazi logos should mean pressing charges for agitation against an ethnic group. Nevertheless, the attitude of the police towards Nazis seemed to be ignorant, because after the demonstration some of the NRM´s members assaulted a person in Töölö. The open subjectivity of the police challenges anti-fascist work and can increasingly attract foreign nazis to participate in the upcoming demonstrations. Already in the NRM´s demonstration in Tampere, Swedish Nazis commented how great it is to demonstrate in Finland, because the police do not do anything to stop Nazi salutes, far-right symbols and let them assault people outside their own demonstration. Before Independence Day the police announced they will apply for a temporary ban for the organisation if the Nordic Resistance Movement is permitted to appeal the sentence of the Pirkanmaa district court to the Turku court of appeal. It remains to be seen, what this would mean in practice.

The only Finnish group announcing in advance its participation to the NRM´s national socialist demonstration was Soldiers of Odin (SoO), whose members lined up with signature vests under their own banners and two flags. SoO is nowadays just a cheaper version of the NRM and therefore it is expected that members of SoO will join in the more organized NRM if the NRM can continue operating in Finland. The small amount of participants in the Soldiers of Odin´s bloc speaks its own language especially when it comes to the present state of the organisation. Based on the city badges on their vests there were members from all over the country (in addition to Helsinki at least from Jyväskylä, Järvenpää, Kouvola, Jämsä, Riihimäki, Mikkeli and Asikkala), but still there were barely 30 people in the SoO bloc. The same day in Kemi SoO organised its own Independence Day torch march with twenty or so members from the organisation´s northern sections.

After Indepenence Day the NRM´s local group leader from Oulu, Santeri Keränen, was bragging in the NRM´s own radio program about the participation of SoO in the national socialist demonstrations first in Tampere in October and now on Indepence Day in Helsinki. According to Keränen the participation of SoO in these national socialist demonstrations shows that SoO have revealed who they stand with and have clearly chosen their side. This does not come as a surprise for those who have been following the activities of the organisation, because already from the very beginning the founder of SoO, Mika Ranta, has declared himself a nazi. 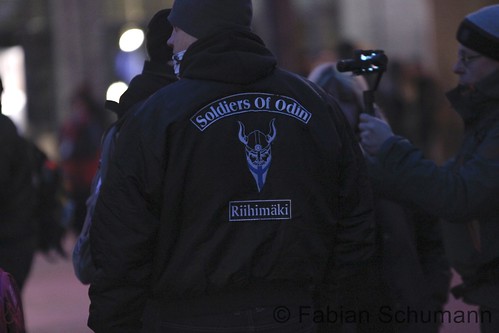 Jussi Poikonen, who was active in the racist and anti-immigrant “Suomi Maidan” protest camp, participated with a Riihimäki city badge on his vest in the Kohti Vapautta -march. Other Suomi Maidan activists were present in this national socialist demonstration as well.

Correspondigly, also a bunch of boneheads showed up carrying a Blood & Honour -banner. Blood & Honour is an informal network of the neo-Nazi music scene, in which many of the NRM´s Finnish members have been active before joining the organisation. Some members of NRM’s Finnish section are still associated with B&H. The NRM´s Finnish leader Antti Niemi, for instance, is a member of Blood and Honour´s local group of Orivesi, and many of the NRM´s leadership are playing in white power music bands or organizing far-right concerts.

A couple dozen members from Rajat kiinni group, Suomi Ensin group and other nationalist groups took part in the demonstration. Olli Heikkilä, Mikko Hamunen and Pertti Nykänen, known for their Youtube live streams from racist demonstrations, were also participating. Heikkilä and Hamunen are members of Suomen Sisu, and both ran for the Tampere City Council in the municipal election in 2017 as the Finns Party -candidates. Hamunen (69 votes, not elected) is a member of the Finns Party and Heikkilä (106 votes, not elected) was running as an independent True Finns candidate.

In the Kohti Vapautta -demonstration the official delegations of Swedish and German neo-Nazis were represented and some random participants from other countries, too. From Sweden there were approximately 15 members from the Nordic Resistance Movement. Among them was the leader of the entire Nordic Resistance Movement, Simon Lindberg, and Pär Sjögren, the leader of the local groups from Dalaland and Värmland. Sjögren was streaming live for the Swedish branch´s web tv, Nordfront TV (NTV) and by disguising himself as a fake journalist tried to troll and disturb anti-fascists.

Simon Lindberg, the Swedish leader of the entire Nordic Resistance Movement gave a speech in the Kohti Vapautta -demonstration.

From Germany, a local section of the national socialist NPD party´s Junge Nationaldemokraten– Youth organisation was present. The leader of the youth organisation, Maik Müller, appeared with three other German neo-Nazis. Müller is one of the NRM Finland’s main contact people in the neo-Nazi movement in Central Europe, and he has visited Finland several times during this decade (for instance, Müller has been lecturing in Helsinki in a Taistele vastaan seminar organized by the NRM in 2011 and joined the afterparty of the first 612-demonstration in 2014). Finnish Nazis have paid follow-up visits to Müller, who is one of the main organizers of the biggest neo-Nazi demonstration in Germany held every February annually in Dresden and he made its official announcement to the police this year.

German Nazis in the NRM´s demonstration in Helsinki. Maik Müller is the second one from the right.

We thank Sören Kohlhuber and Fabian Schumann, who were filming different demonstrations on Independence Day and gave us the permission to use the pictures. Some of the photos have been cropped from the original ones. Kohlhuber and Schumann follow and document far-right movements of different countries. Follow them on Twitter: @SoerenKohlhuber and @schumann_fabian.